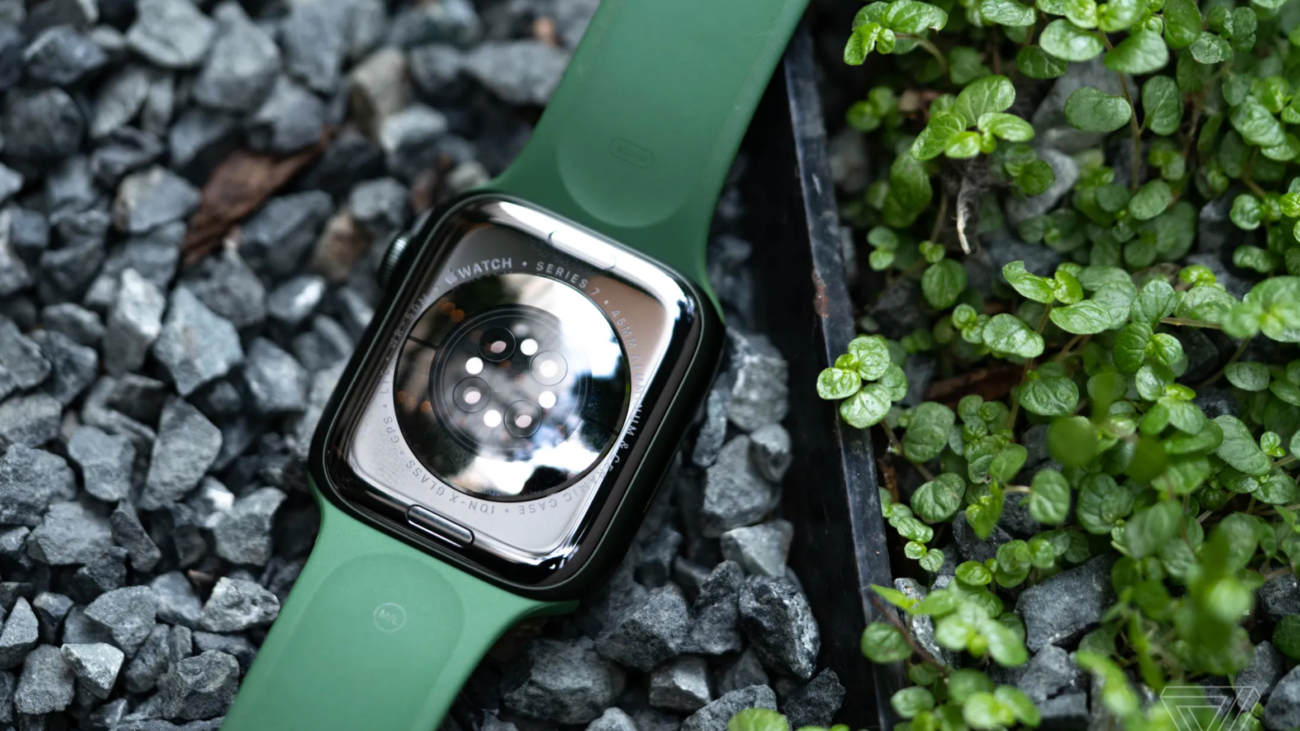 A bigger screen and faster charging are nice, but not reasons to upgrade

That’s a gentle way of saying that if there’s nothing wrong with your current watch, there’s nothing in the Series 7 that should compel you to upgrade. If you’ve been waiting for some key feature before buying your first Apple Watch, I don’t know that it’s here, either. I wrote very nearly the same thing last year about the Series 6 and I think that’s just what we should expect from the Apple Watch series going forward: iterative updates that will be great when you replace your current watch, but not a reason to upgrade.

The Apple Watch Series 7 is great. The larger screen and faster charging are the two headline features and both are welcome. The Apple Watch is in a class entirely of its own right now. Nothing else is as good for iPhone users and nothing like it is available for Android users.

There are new color options available, including midnight (which apparently has a hint of blue in it), starlight (a cross between silver and gold), and a dark green. Apple sent me the green one and in most light it just looks gray — but every now and then it’ll pop and look visibly green. 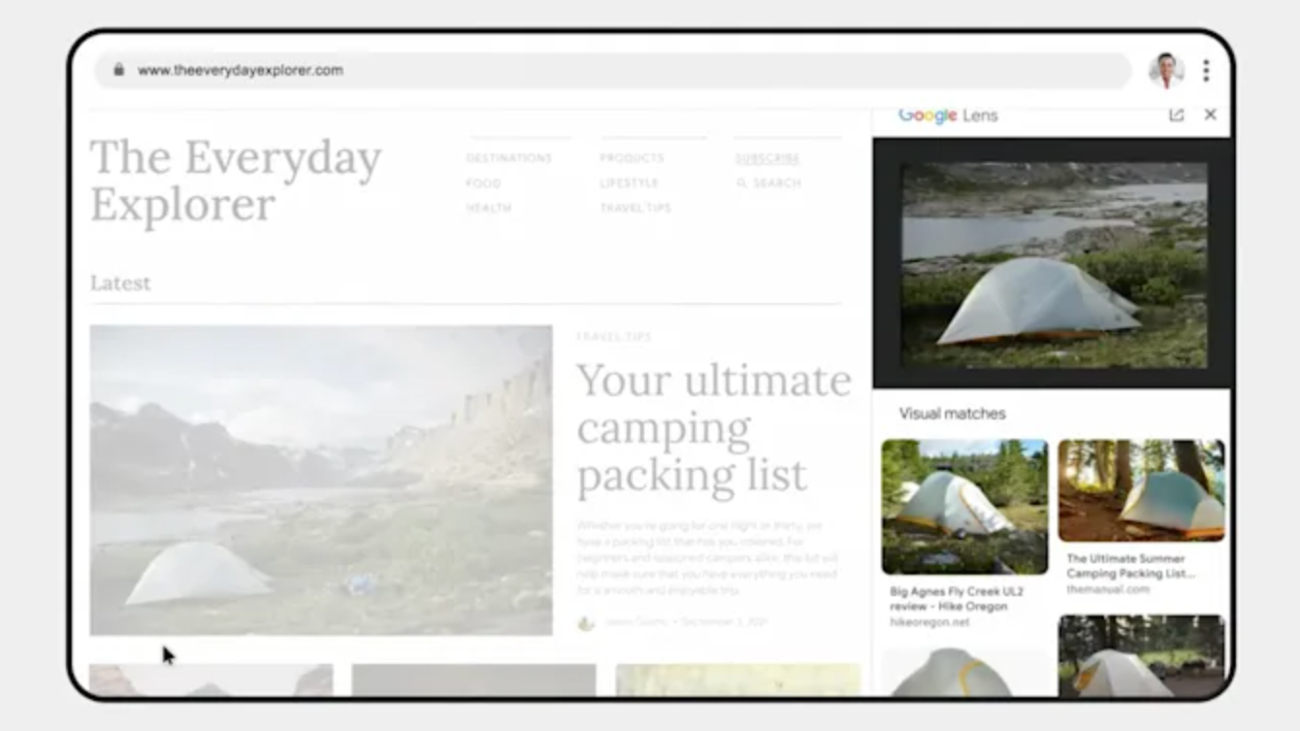 ou no longer have to point your phone at your computer screen if you want to use Google Lens on your computer. As part of a string of updates, Google has revealed that Lens will be available for Chrome on the desktop in the “coming months.” You just have to right-click on a website, choose to search with Lens and select the part of the page you want to examine. After that, you’ll get results relating to the content you highlighted. Needless to say, that could be helpful if you’re trying to identify an animal or a hot new jacket.

There are some upgrades coming to Lens on your phone. An update in early 2022 will let you ask a question after snapping a photo. If you need to know how to repair a part on your bike, for instance, you’ll get results even if you don’t know what that part is. The Google app for iPhones, meanwhile, will let you search for products within images. 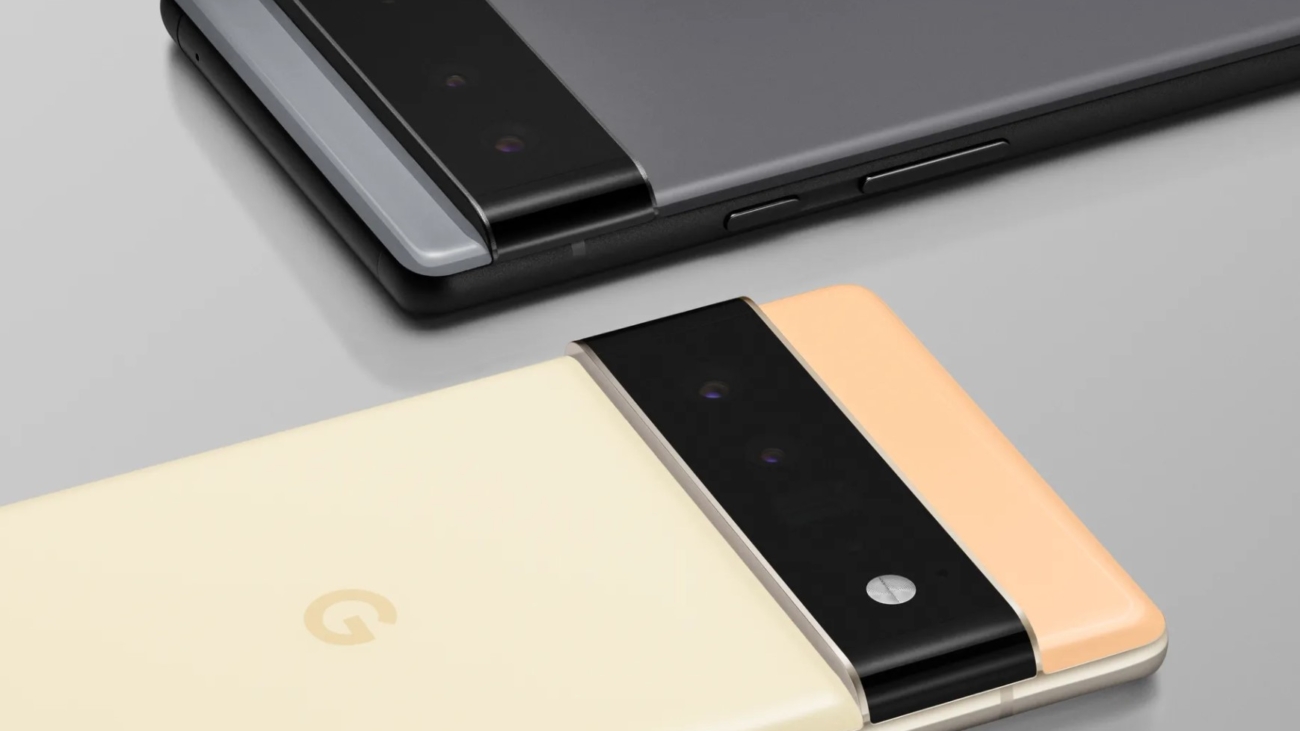 Google will officially introduce the Pixel 6 models on October 19th

New leaks from a marketing site appear to confirm that the camera for the Pixel 6 will have a new Magic Eraser feature, and the devices will apparently get five years of Android security updates (h/t 9to5 Google)

According to reliable leaker Evan Blass, the Carphone Warehouse website was showing images of Google marketing materials for the Pixel 6 and Pixel 6 Pro (the images have since been taken down, but you can view the earlier versions of the Carphone Warehouse pages on the Wayback Machine here and here). Screenshots show the description for the previously leaked Magic Eraser, which will apparently be linked to Google Photos:

Magic Eraser makes distractions disappear with a few taps. Remove strangers and unwanted objects in Google Photos, so the people and places that you capture remain the true stars.

Much of what is in the latest photos has been leaked or confirmed already; the Pixel 6 camera will have a 50MP main sensor and a 12MP ultrawide lens, and the Pixel 6 Pro will have a 48MP telephoto lens.

And as Engadget noted, some of the copy on the leaked images (in the tiny, tiny fine print) references “Android security updates for at least five years from when the device first became available on the Google Store in the US.” That would mean Pixel 6 devices would have protection into 2026.

Google did get ahead of some of this year’s leaks with early announcements about the Pixel 6 and the Pixel 6 Pro, including hints about its Tensor processor. The company will hold its traditional autumn hardware event on October 19th, where it will “officially introduce” the Pixel 6 and Pixel 6 Pro. 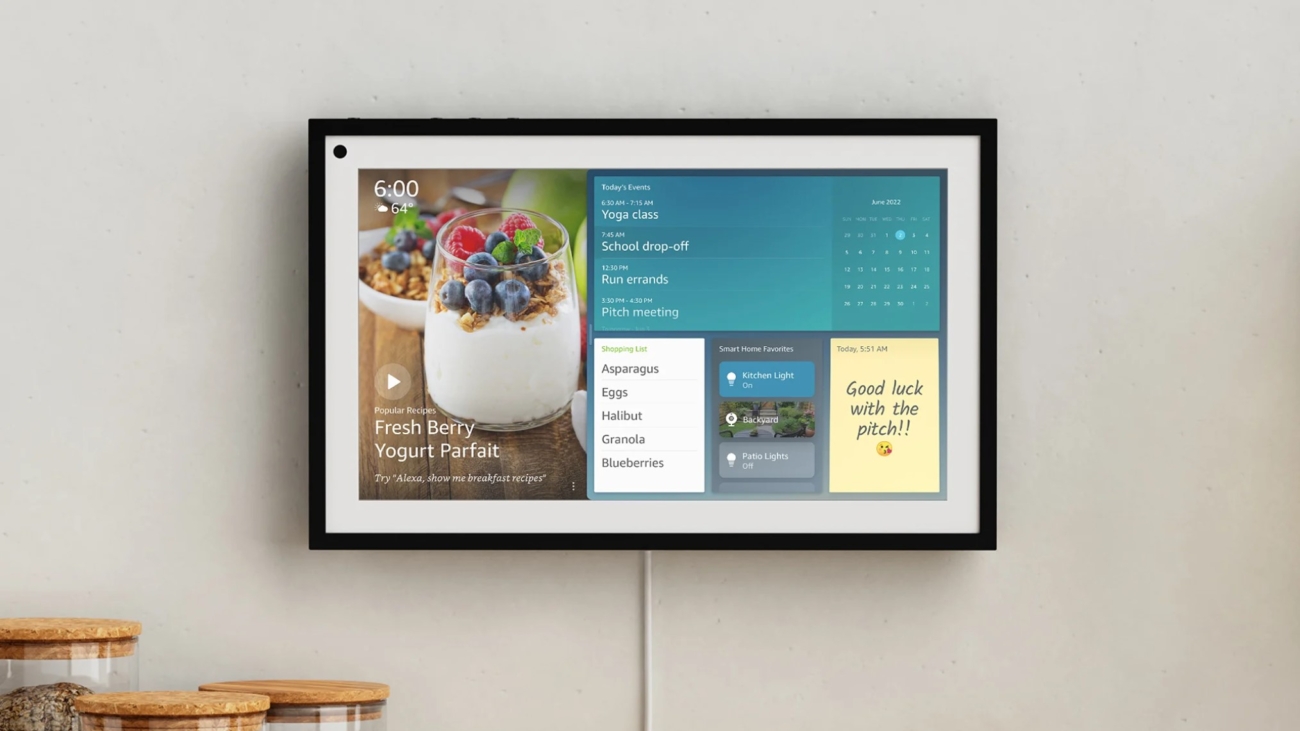 Amazon has already released updated versions of the 5, 8 and 10-inch Echo Shows earlier this year, but it’s not done with smart displays just yet. Today, at its annual fall event, the company announced the Echo Show 15, its largest one to-date. With a 15.6-inch 1080p display, the Echo Show 15 almost looks like a large picture frame. It can be wall-mounted or placed on a stand, in either portrait or landscape orientation. The Echo Show 15 will retail for $249.99.

Since it has such a large display, Amazon has introduced a redesigned home screen to go along with the Echo Show 15. You can configure it so that part of the screen has the usual rotating array of ambient content like headlines and weather updates (those who already have an Echo Show will be familiar with this), while the rest of it can be customized with various Alexa widgets. Think of the whole thing as a multifunctional family bulletin board.

Those widgets include useful applications like a family calendar, a shared shopping list, sticky notes, to-do lists and reminders. There’s also a “What to Eat” widget that houses recipe recommendations from sources like Allrecipes and Epicures, restaurant delivery choices and more. It even has a Blue Apron option that helps you order meal kits and shows you step-by-step recipe instructions.

A “smart home favorites” widget helps you view and control your favorite smart home devices. You can also enable picture-in-picture live camera viewing so you can keep an eye on your kids while you’re cooking dinner. There’s also a widget to help you track package deliveries.

According to Amazon, these Alexa widgets will also be available on the other Echo Shows, but you’ll have to swipe the screen to see them. On the Echo Show 15, however, they can be arranged to appear on the home screen, which can’t be done on smaller-screened Echo Shows. In the event you have guests over and don’t want them to see all of your calendars and personal information, you can enable a picture frame mode on the Echo Show 15 so that it only shows photos or art work. 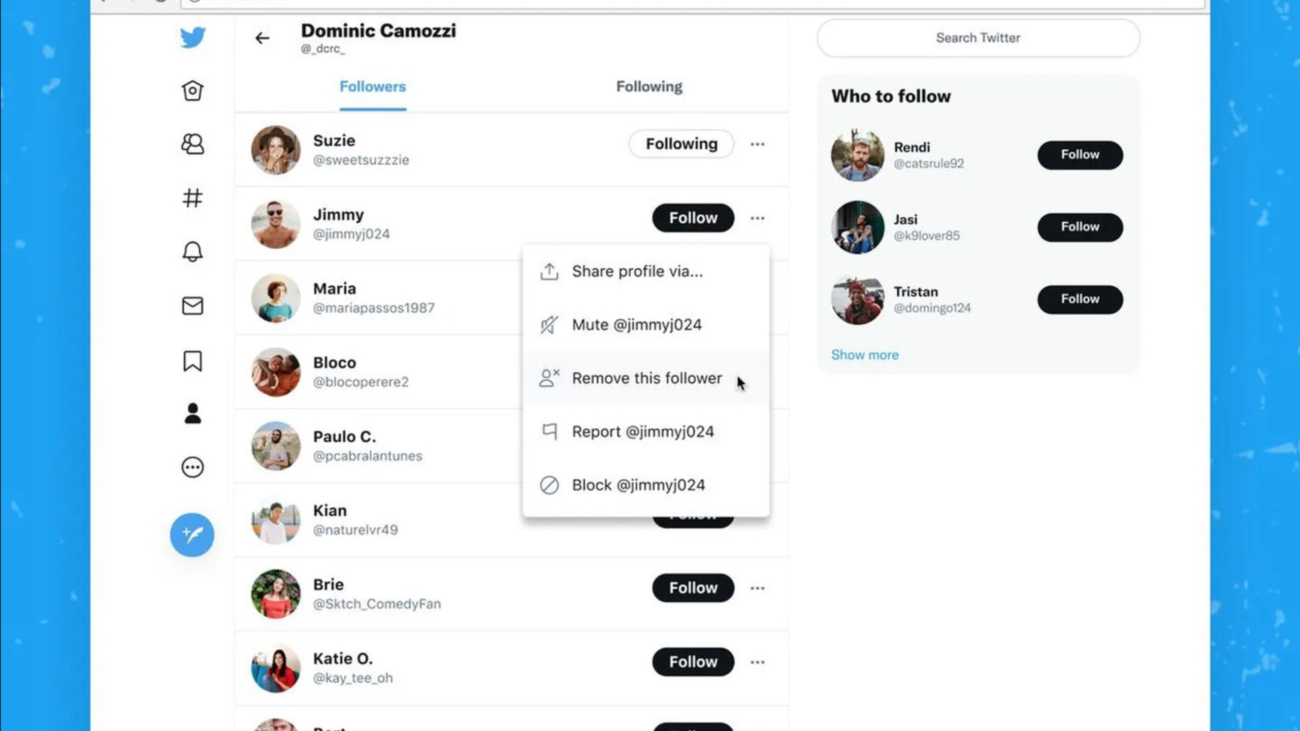 The feature first rolled out in testing last month

witter is rolling out a new feature that lets any user on the web remove a follower without blocking them, an action also known as a “soft block.”

To soft block a follower, head to your profile, click followers, click the three-dot menu next to a follower, and then click the option “Remove this follower.” (You can see what that option looks like in an image from Twitter at the top of this post.) A follower you remove won’t be notified of the change.

A soft block is different from a block because it allows a user to still see your tweets and direct message you, but they won’t see your tweets on your feed. That said, when you remove a follower, they can follow you again if they want.

THE NEW METHOD IS EASIER THAN THE PREVIOUS ONE

The feature might be useful if you don’t want to do a full-on block but want to create some space from another user. This new method from Twitter is a little easier than the previous one, which required you to block and unblock someone manually.

The ability to remove a follower is Twitter’s latest feature to give users more control over their experience on the platform to help curb abuse and harassment. In September, the company began testing a new Safety Mode feature that temporarily autoblocks abusive accounts, though it’s unclear when that may roll out more widely. 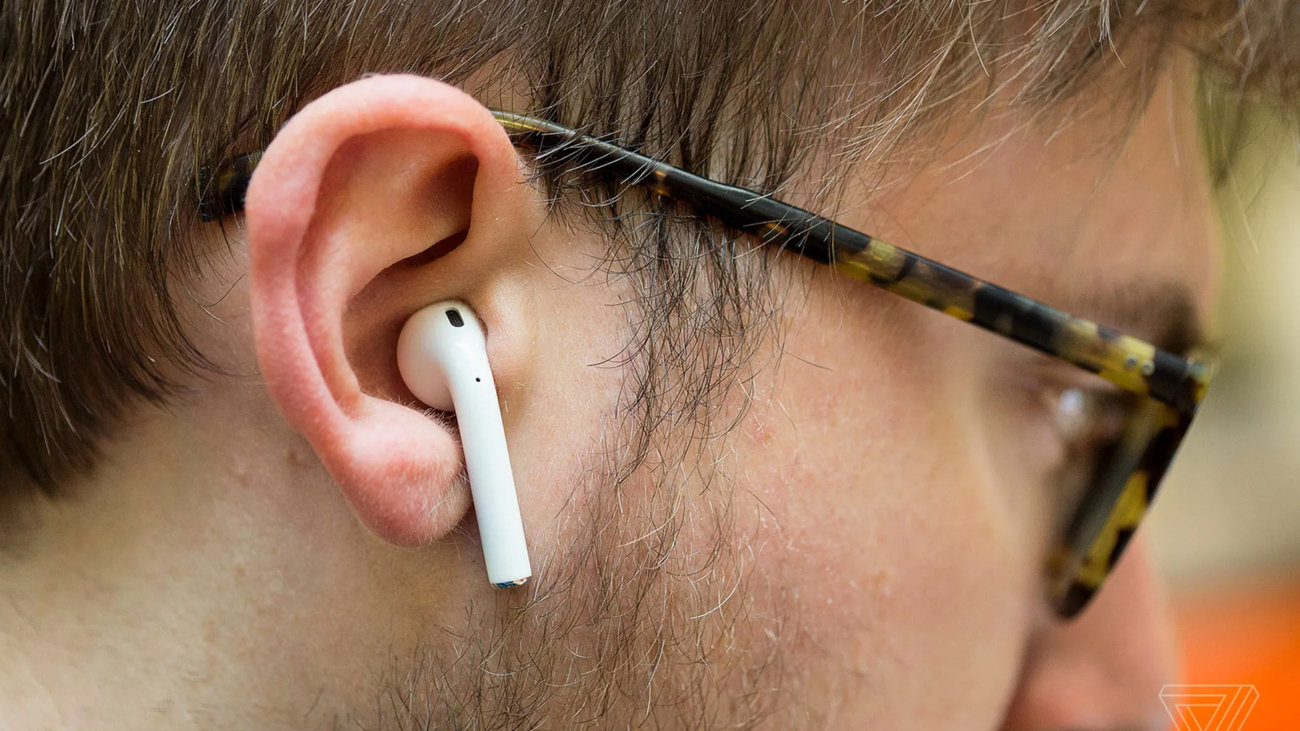 Apple is reportedly exploring new health-focused features for its AirPods, according to The Wall Street Journal. Features might include using the earbuds to take wearers’ temperature, monitor their posture, and improve their hearing. The WSJ notes that it’s not clear if the latter function differs significantly from AirPods’ existing “Conversation Boost” feature.

According to the WSJ, these functions “aren’t expected by next year and might never be rolled out to consumers or the timing could change.” In other words, it sounds like the iPhone maker is just exploring these new health features, rather than actively working on integrating them with products due out in the next year or two.

Adding these sensors would make sense for Apple. The company has increasingly marketed its products on the strength of their health and fitness applications, though so far, most of this attention has been focused on the Apple Watch. Reports last month suggested the company was looking into adding various sensors to the wearable, including monitoring blood pressure, temperature, sleep quality, blood oxygen, and blood sugar.

Integrating health features into commercial products is tricky work, though, mostly because of the difficulty in meeting the high bar of medical regulatory standards. This inevitably leads to delays. It was reported in June, for example, that the next Apple Watch would add temperature monitoring, but this function never appeared in September’s Apple Watch 7.

Unfortunately, the WSJ’s report doesn’t include much detail about Apple’s plans for the AirPods. Taking temperature from someone’s ear is commonplace, though, and there are many posture devices on the market that use digital sensors to alert wearers when they’re slouching. Apple has already shown it’s interested in using AirPods as a hearing assistant of some sort, though the earbuds are not actually approved for this purpose by the FDA.